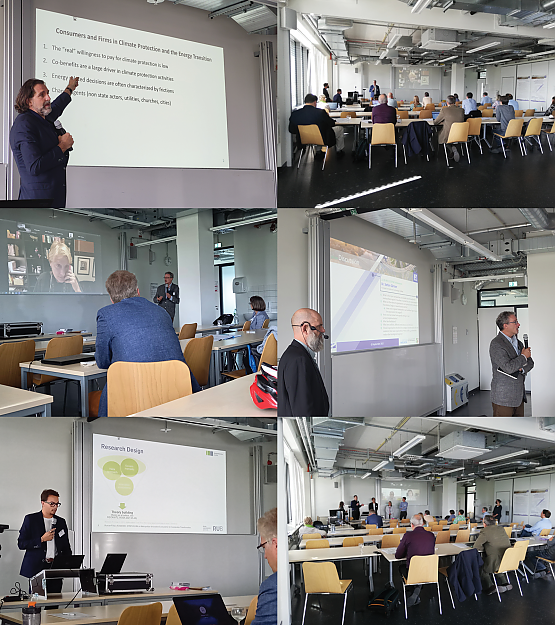 The Academic Symposium was closely linked to the Metropolitan Innovation Summit Ruhr 2022 (31 August to 2 September 2022), which KoMet organised together with the Federal State Government of North-Rhine Westphalia, and the Ruhr Regional Association (RVR). Actors from politics, science, and business from the metropolitan regions of Tsukuba (Japan), Pittsburgh (USA), Tel Aviv (Israel), Upper Silesia (Poland), Greater Manchester (United Kingdom), the Randstad (Netherlands) and the Ruhr Metropolis took part to present and discuss central aspects of sustainability transformations as well as the innovation strategies of their regions based on the respective innovation ecosystems. The participants had the opportunity to make new contacts and expand their international networks.

As a prelude to the actual conference day (2 September 2022), a matching event (31 August 2022) and a welcome tour (1 September 2022) took place, which offered a platform for personal exchange among the delegation members of the respective metropolitan regions. As part of the welcome tour, the international guests visited places of innovation and sustainable transformation in the Ruhr Metropolis:

▶ Innovation Hub I – "Mark 51°7" in Bochum: Science and technology quarter on the site of the former Opel plant, oriented towards the guiding principle of "knowledge creates economy", O-Werk with Makerspace as part of the Worldfactory Startup Center of the RUB;

As part of the symposium, KoMet invited the conference participants of the Metropolitan Innovation Summit Ruhr 2022 as well as the interested public to the Ruhr-Universität Bochum (RUB) on 3 September 2022 to discuss metropolitan innovation ecosystems in the context of sustainability transformation in depth from the perspective of (transformative) research. As a basis for scientific discussion and fundamental understanding, KoMet defined ‘Metropolitan Innovation Ecosystems for Sustainable Transformation’ as structures that are formed and used by actors within and between different social systems to foster innovations that support sustainable transformation. Such innovation ecosystems are highly complex and dynamic systems with numerous and changing actors bringing different resources, interests, perspectives, and logics of action.

The day began with a welcome and introduction by Uta Hohn (KoMet speaker/WG Urban and Metropolitan Studies, RUB), Martin Paul (Rector of Ruhr-Universität Bochum) and Matthias Kiese (KoMet Research Field Knowledge Metropolises/Dean of the Faculty of Geosciences/WG Urban and Regional Economics). In their speeches, the professors emphasised the relevance of mutual learning and interregional knowledge exchange between scientists from universities and research institutes as well as cooperation with practitioners for the success of a sustainability transformation from the respective innovation ecosystems.

Maryann Feldman (Arizona State University, Phoenix) kicked off the symposium. In her keynote address "Innovation for Urban Resilience in the Desert", she focused on the innovation ecosystem of the desert region of Phoenix/Arizona in the United States and the location-specific challenges and restraints of a sustainable transformation. Maryann Feldman explained to the audience that Phoenix is the fifth largest and fastest growing city in the USA and not only considered the cultural but also the financial centre of Arizona. Until the 1990s, Phoenix had been marketed as a ‘sunny tax haven with attractive golf courses’. In 2014, the goal of achieving CO2 neutrality by 2050 was formulated, before eight sustainability goals were defined in 2016 to become a ‘Sustainable Desert City’ by 2025. Under the slogan ‘Turn adversity into advantage’, strategies for sustainable water resource management and the positioning of Phoenix as a hub for renewable energies was developed. According to Feldman, the combination of bottom-up activities at the neighbourhood level and top-down approaches by the city government are necessary to overcome the challenges of water shortage and heat. Furthermore, she emphasised the importance of a cooperative rather than competitive behaviour of the key actors involved. In this context, the existence of an obvious crisis enforced the necessary willingness to cooperate and ultimately a quick consensus-building within the innovation ecosystem. However, questions of a just transformation had not been addressed enough, e.g. with regard to the issue of homelessness in a desert city.

Following on from this, Andreas Löschel (Environmental/Resource Economics and Sustainability, RUB), Ray Gastil (Carnegie Mellon University, Pittsburgh, Remaking Cities Institute) and the plenary, moderated by Stefan Gärtner (Institute for Work and Technology), discussed questions of governance and leadership in metropolitan sustainability transformations, taking into account different scale levels of action. Andreas Löschel examined the energy system transformation from an economic perspective, based on studies he conducted himself. He concluded that despite general agreement, the concrete individual willingness to pay for climate protection is relatively low among the general population in Germany. From Andreas Löschel's point of view, so-called co-benefits of climate protection strategies and change agents should therefore be evaluated as essential resources of an innovation ecosystem, so that it can successfully contribute to a sustainability transformation. Ray Gastil reported based on his experience as an urban planner and scientist that the innovation ecosystem of the city of Pittsburgh, which got hit hard by deindustrialisation, profited above all from the active role of the university and research institutions. Since the 1990s, these created places of innovation and thus catalysts for testing sustainable solutions in the city. Philanthropists and their foundations also act a large part for the innovation ecosystems of US cities: In Pittsburgh, for example, the sponsorship based NPO ‘Green Building Alliance’ plays an important role in the field of sustainability. In the Pittsburgh 2030 District, a network of leading growth industries is committed to energy transformation, and at the neighbourhood level, the method of ‘asset mapping’ has proven itself.

Afterwards, young researchers from the RUB and the Japanese University of Tsukuba presented their doctoral projects in five-minute pitches, moderated by Judith Wiemann (WG Urban and Regional Economics, RUB). The presentations – which had qualified in advance – were very diverse in terms of content and covered a wide range of the topic area of sustainable transformation of metropolises. The young researchers used the Academic Symposium as an opportunity to present their research projects to a larger audience and build international and interdisciplinary networks.

▶ Markus Gornik (M.Sc., RUB): Knowledge-Based Spatial Development: The Ruhr Academy Format in the Context of the Regional Innovation Ecosystem for Sustainable Transformation of the Ruhr Metropolis

▶ Harriet Ellwein (Dipl. Geogr., RUB): Cooperation Between Municipalities and Science in Urban Development – an Investigation from a Municipal Perspective

Matthias Kiese then summarised the main findings of the Metropolitan Innovation Summit and the Academic Symposium and pointed out potentials for international comparative research: Today, metropolitan innovation ecosystems are seen as arenas for developing and testing solutions to major societal challenges such as decarbonisation. However, the Summit unveiled variations between countries and metropolitan regions in mission orientation (e.g. solutions for ageing societies in Japan, security technologies in Israel), existing innovation potentials and governance capacities and structures. Identifying and explaining differences in the transformation capacity of metropolitan innovation ecosystems and using them for mutual policy learning is therefore a worthwhile challenge for transformative research. Especially young researchers working on similar topics from different perspectives illustrate the great potential for joint publications and the development of new research projects with comparative case study designs.

The two-year Horizon Europe research project TRANSFORMER, which started in September under the leadership of Matthias Kiese, has a similar orientation. The project intends to design and pilot Transition Super Labs in four European metropolitan regions with similar transformation challenges. Here, pilot solutions for regional climate neutrality strategies are to be developed in multi-stakeholder formats, which can later be transferred to other regions.

Finally, the participants took the opportunity to reflect on the results of the Ruhr 2022 Metropolitan Innovation Summit and the Academic Symposium from a scientific perspective. It was pointed out that social innovations, e.g. in the form of change agents/organisations, are extremely relevant for managing the transformation process, but have only marginally been discussed at the conference. In addition, it was criticised that the local level, as the starting point of transformation processes, should be considered to a greater extent. The participants criticised the transferability of best practice examples to other cases. From their point of view, an adaptation would only be possible by guaranteeing a regular exchange of knowledge and experience between the participating actors from different metropolitan regions.

The Academic Symposium has now provided an initial impetus for this. In the aftermath, the participants will meet to explore possible joint research activities in the field of inter- and transdisciplinary metropolitan research.

We would like to thank the Federal State Government of North-Rhine Westphalia and the Stiftung Mercator for funding the event.

You can download the programme of the Academic Symposium here.

You can find some impressions of our event in the picture gallery.